Race engineer Brad Goldberg was a puddle of tears on the timing stand who had to be coaxed down to join in the celebrations. Assistant engineer Angela Ashmore was the opposite, gone in a flash as she ran up the track with the rest of the new Indy 500-winning crew to greet their driver, Marcus Ericsson, as their No. 8 Honda was steered into victory lane.

If all of the engineers on pit lane cheered for Brother Brad and Sister Angela, all of the chief mechanics smiled for Dave Pena, who was given his first post as a crew chief during the offseason with Ericsson. Pena’s shared in the team’s greatest successes, winning the 2010 and 2012 Indy 500s with Dario Franchitti, but this was his first win as a car chief. In fact, he celebrated his 20th anniversary with the team just last week. Talk about an amazing reward for his dedication.

And let’s not forget Ericsson’s race strategist Mike O’Gara, among the most talented multitaskers within the organization. Ganassi deploys O’Gara to handle the team’s most important items of the day; he ran its Le Mans-winning Ford GT program, got the Cadillac Racing effort up and running and has been a major IndyCar asset for years in Indy-only or full-time capacities. As hard as it is to believe, this was also O’Gara’s first 500 win.

The amount of first-time winners in their current roles makes for a heartwarming component of the latest Indy 500 victory. Goldberg’s start is particularly remarkable considering how his life and career were under threat late last year. Without going into specifics, a visit to the doctor revealed he was facing the same medical challenge that claimed his father’s life. An offseason spent with multiple hospital visits and treatments had a most fortunate outcome, all which made Goldberg’s win on Sunday with the No. 8 crew such a heavy and tearful moment for one of the sport’s good guys.

“Dealing with things my father went through who passed away when I was nine, I just want to make him proud,” Goldberg told RACER as the tears returned while standing at the base of victory lane. “I couldn’t have done it without him. And I can’t even describe what it means to win. I’ve been doing this race for 22 years, and 20 years now with Chip Ganassi Racing.”

Outside of the pair of 20-year anniversaries for Pena and Goldberg, more interesting numbers emerged from the win as a car bearing the No. 8 car won for the first time since Pat Flaherty’s No. 8 Offy-powered Watson roadster crossed the yard of bricks in 1956! Sunday’s Indy 500 also marked a specific outing number for Ericsson’s No. 8 Dallara DW12-Honda that Ashmore had to keep secret from her engineering partner.

“Today was Session 13,” she revealed to an astonished Goldberg. “I didn’t tell you. I can’t tell you! Brad is crazy superstitious about the number 13. I’ve released new versions of software before just to pass over the number 13; I’ll use 12 or 14. I typed in ‘Session 14’ today for your benefit, but it was really Session 13.” 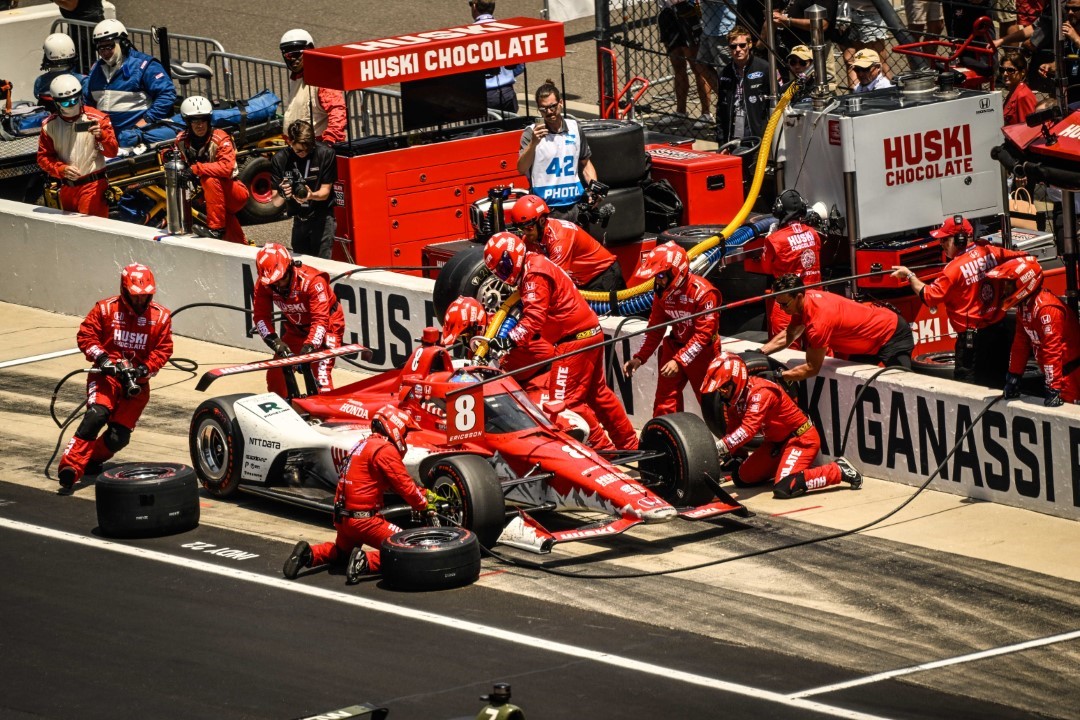 Having been united in 2020 when Ericsson joined CGR, the duo of Goldberg and Ashmore has flourished on the No. 8 timing stand. After earning his first IndyCar win in 2013 with former CGR driver Charlie Kimball at Mid-Ohio, the next came after a long spell for Goldberg — now joined by Ashmore — at Detroit in 2021 and they added another at Nashville as the Swede rose to an impressive sixth-place finish in the championship. A fourth IndyCar win for Goldberg and third for Ashmore came at the race that matters more than all the others and thanks to their incredible chemistry with Ericsson, there’s no doubt more will follow.

“We’ve been together now for our third season, right?,” Ashmore said. “There’s obviously a growing period when you get two people together and there’s like a buildup of trust over time. So after three years, I think Brad definitely can trust me when I tell him a fuel number now and I can trust Brad if he tells me to do something. And even some of the stuff that’s not said, like the strategy during the race, I know how he’s thinking ahead of time. That makes it a little easier for me to look ahead at some of the fuel strategy work.”

Goldberg thinks the world of Ashmore.

“She’s an amazing talent, unbelievable,” he added. “I’m so lucky to have Angela on the stand. We cheated a little bit because her husband was with me on the Ford GT program, so I already knew her before we got together on the 8 car. And we’re just so fortunate with Marcus, who is such a sponge. It’s really fun to be a part of this team because she came from NASCAR, I came here from both IndyCar and sports cars, and Dave Pena has been such an important person at the this for a long time — all of the crew on the 8 car, really, there such a wide variety of talent. It’s wonderful.”

Ashmore joins a group of immensely talented women who’ve made their mark on the Indy 500, and as she tells it, the culture within CGR is what made the difference in how the race was settled.

“Even two laps to go I wouldn’t let myself believe that it was gonna happen, and I don’t think it’s sunk in quite yet,” she said. “In NASCAR I just wanted to win so bad, and it was so hard and it just felt like it was always an uphill battle. Every week you thought you had something, and it was just taken away. Since I came to Ganassi, working with this group of people, it’s insane. The people that work here are so good, and it’s not just one person or one group; it’s the teamwork.

The examples are set from CGR’s highest-profile employees.

“Everyone saw that in qualifying with the drivers,” she continued. “Chip was around and pulled all five of them together. The unselfishness in his team is unbelievable, and how many egos and how many personalities that all come together for the common good. For one common goal. I’ve never been a part of something like this where everybody’s caring for each other, and the support everybody has from each other.”

And so Brad, and Angela, and Dave and Mike and many others on the No. 8 Honda had their long-held wishes become reality at the Indy 500. Leave it to Goldberg to get the tears flowing again as we closed the conversation.

“It makes it really special to celebrate this with my wife and family here,” he said. “It’s amazing. You know, I visited my dad’s grave last night before the race. And now I’ve got a couple hats from victory lane to bring him tomorrow.”