A Driving Force in Motorsports with Eric Cowdin and SAE 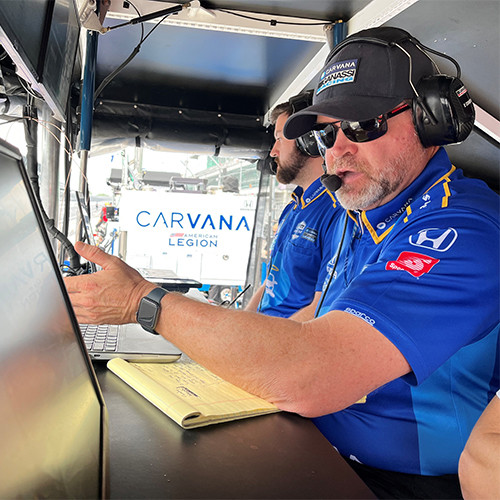 Innovations are born on the racetrack.

In the automotive industry, it’s common knowledge that racing has long had a meaningful impact on technological breakthroughs. From safety to engines to simulation, the racetrack acts as an incubator—and the engineers who support the drivers help bring these exciting innovations to life.

Taking his aerospace engineering degree down an unexpected path, Eric Cowdin has made innovations as a Race Engineer for Chip Ganassi Racing™. As a graduate student, Eric found his way to the Formula SAE team and was immediately put in charge of the wing program, tasked with looking into the aerodynamic forces that help the car move fast while sticking to the road—a new undertaking for the team at the time.

As his time with Formula SAE progressed, Eric developed a passion for motorsports, eventually going on to become part of the team that won the Indianapolis 500 in 2013. We sat down with Eric to discuss his journey into motorsports, his passion for racing, and what the future holds for the racing industry.

Eric Cowdin started his collegiate career studying aerospace engineering at Virginia Tech. In search of a hobby outside of school, he found his way to the Formula SAE team testing their car nearby and was immediately put in charge of the wing program, looking into the aerodynamic forces that help the car move fast while sticking to the road—a new undertaking for the team at the time. Cowdin continued to learn through his involvement with Formula SAE and developed a passion for motorsports that led to a career. After finishing his graduate program in 1993, Cowdin drove to an IndyCar race in Pennsylvania where he made a valuable connection with Chip Ganassi Racing™ engineering manager Julian Robertson. In 1994 he got his first job in racing with a IMSA GTS team, Brix Motorsports. He moved to Detroit for the opportunity, only for the chief engineer to quit after Cowdin’s first few weeks on the job. He was put on the spot for 24 Hours of Daytona and continued to fill in at different events as the team searched for a replacement, all the while proving his skills. Eventually, the team higher ups decided to give Cowdin his due and make his position as race engineer official. His career continues to evolve with many triumphs along the way, including the 2004 IndyCar Championship and the 2013 Indianapolis 500.