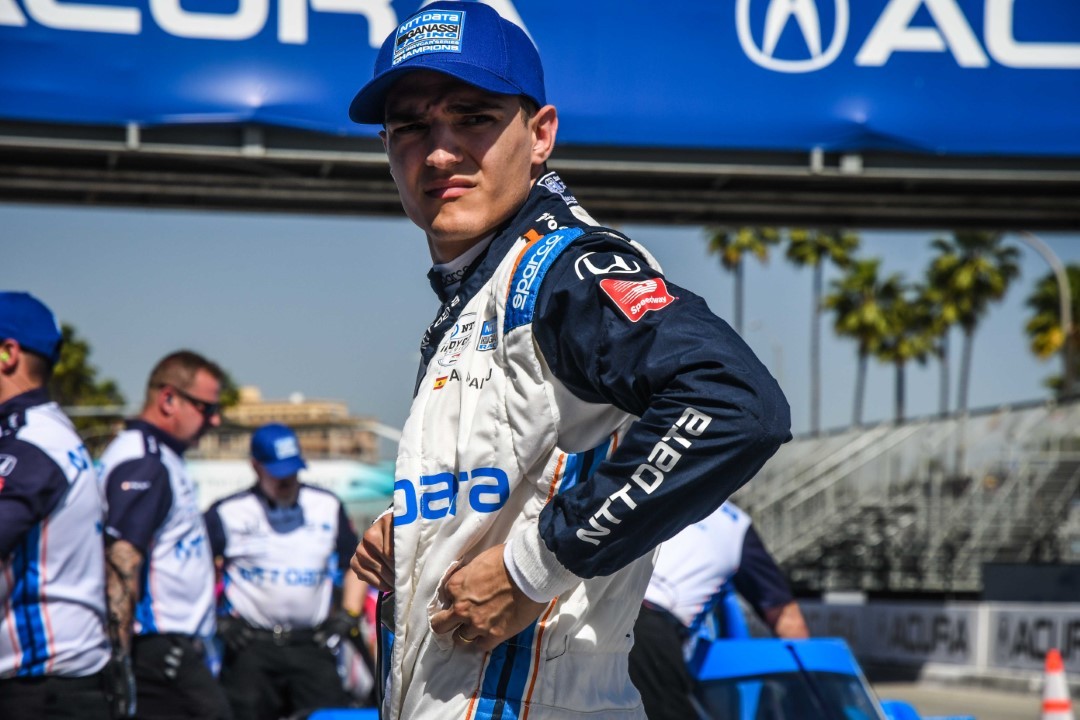 Simply by surviving the crazy attrition scattered throughout Sunday's INDYCAR season finale, points leader Alex Palou clinched his first championship in his second season in the series simply by keeping his No. 10 Ganassi car clean and out of harm's way.

Palou finished 4th in the Acura Grand Prix of Long Beach Sunday, just over 2 seconds back of of race-winner Colton Herta, who narrowly held off Josef Newgarden to close the 2021 season with back-to-back victories. Palou, the 24-year-old Spaniard who picked up his first three INDYCAR victories this season, entered Sunday needing to finish 12th or better to clinch the title, no matter what contenders Pato O'Ward and Newgarden did on-track.

"That's ours right there!" Palou said on the NBC Sports broadcast as he stepped out of the car, looking over to the Astor Cup. "Oh my gosh, what a race, what a year!

"I'm super proud, super happy. I can't thank enough everybody that made this possible, especially Chip Ganassi. I'm super proud to be a champion and the opportunity these guys gave me. I think what got me here is my team. 100%, dream completed. Let's go win another one now!"

With a 47-point pad on Sunday's pole-sitter Newgarden, Palou's main challenger was Arrow McLaren SP's O'Ward, who sat 35 points back. The latter started Sunday in 8th, several spots farther back on the grid than he believed he deserved due to what he and his AMSP team called mistakes in INDYCAR race control's review of chaos near the end of Round 2 of INDYCAR qualifying Saturday.

Theoretically, that perceived error put O'Ward back in harm's way on Lap 1, when going through the Turn 11 hairpin, Dale Coyne Racing's Ed Jones dove low inside of James Hinchcliffe from 9th-place and ran right into O'Ward's left-rear tire. The No. 5 car spun a complete 180 degrees, though he wasn't hit by any other cars in the ensuing mess.

O'Ward spun back around, now in last place, and a couple laps later, he dove into the pits to have his car briefly looked over. No glaring issues were found, and he went back out on-track in 23rd.

Disaster struck just over 10 laps later when, on Lap 19, O'Ward noticed his car lurching as he attempted to accelerate coming down the front-stretch. Quickly, he lost power and slowed to a stop near pit-exit, with what he and the team believed was gear box and drive-shaft damage.

It was at that point, barring a disaster from Palou, that Chip Ganassi Racing clinched a back-to-back championship with its newest full-season driver.

Shortly after, Marcus Ericsson crashed into the wall, ending his day 60 laps down in 28th. O'Ward finished 27th, 42 laps out of the lead. Callum Ilott (26th) and Rinus VeeKay (25th) also dropped out mid-race, and Romain Grosjean dipped into the pits mid-race and eventually finished 10 laps down in 24th. Ryan Hunter-Reay, who took damage from Andretti teammate Colton Herta as cars backed up behind the initial O'Ward-Jones contact, finished his final race in the No. 28 three laps down in 23rd, and Conor Daly and Oliver Askew, who connected mid-race but were able to continue, took 21st and 22nd, respectively.

Once it was clear O'Ward was out of contention for the championship, Palou needed to only finish 23rd or better to secure his title, should Newgarden have gone on to win the season-finale.

Palou's Ganassi teammate Scott Dixon, who started on the front-row in 2nd Sunday, took 3rd, just over 1 second behind Herta. Behind Palou in 4th, Simon Pagenaud, in what was believed to be his final race with Team Penske, rounded out the top-5.

With O'Ward's issues Sunday, Newgarden overtook the 22-year-old AMSP driver to finish runner-up in the INDYCAR title race for the second consecutive year, 38 points shy of Palou. O'Ward ended the year 62 points back of Palou in 3rd. Dixon took 4th, 68 points back of his teammate (after taking the title a year ago), and with his win Sunday -- his 3rd of the season -- Herta jumped into 5th to close the season.

After a dominant Sunday a week earlier, where he led 91 of the 95 laps Sept. 19, Herta was elated to win what he considers his hometown race, after growing up in Santa Clarita.

"(The win) feels amazing. Great car, great team," Herta said. "This has been on the bucket list for a long time. I'm super happy."