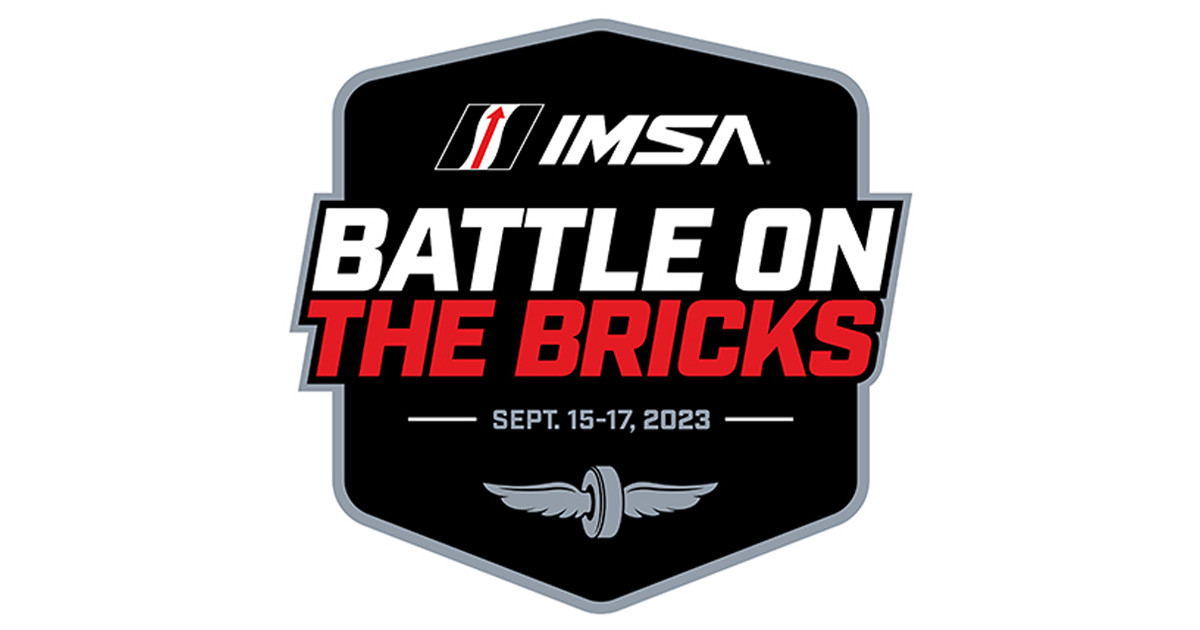 A Full Weekend of IMSA-Sanctioned Series Will Race on the Road Course from Sept. 15-17, 2023

For the first time since 2014, the IMSA WeatherTech SportsCar Championship will be back at the Racing Capital of the World on the weekend of Sept. 15-17, 2023, as the headline event of a full weekend of IMSA sports car action billed as the “IMSA Battle on the Bricks” around the 14-turn, 2.439-mile road course. The two-hour, 40-minute WeatherTech Championship event will be held on Sunday, Sept. 17 with live NBC network television coverage.

“Indianapolis Motor Speedway is hallowed ground in the world of motorsport, and we are honored to bring IMSA and the WeatherTech Championship back to IMS,” said IMSA President John Doonan. “There has been mutual interest and many conversations between IMSA and IMS leadership for quite some time to bring our brand of premium endurance sports car racing back to the Speedway and our collective fans. As we launch an exciting new era in 2023 and introduce GTP as our top category of prototypes alongside many of our other successful categories and sanctioned series, the timing is right for a full weekend of IMSA action in Indianapolis and on NBC next fall.”

In addition to Sunday’s WeatherTech Championship race, the IMSA Michelin Pilot Challenge will headline the action on Saturday, Sept. 16 with a four-hour, bumper-to-bumper traffic jam of production-based race cars. The weekend also will include other IMSA-sanctioned single-make series to be announced later.

“Our reputation as the Racing Capital of the World will be further enhanced by the IMSA Battle on the Bricks, as IMSA will join the major series competing at IMS in 2023,” IMS President J. Douglas Boles said. “IMSA features some of the most evocative manufacturers and machines in global motorsports, so a return to IMS is a perfect fit for our loyal fans. We can’t wait to see exciting new GTP prototypes compete on the road course in yet another full weekend of action at the Speedway, complete with great racing in other classes and the Michelin Pilot Challenge.”

The IMSA Battle on the Bricks weekend will be a three-day festival showcasing the pinnacle of sports car racing. With 18 different manufacturers currently competing in IMSA and unparalleled fan access to the garage area throughout the weekend, race fans in the IMS infield can get up close and personal with their favorite sports cars, drivers and teams.

Fans also will be able to camp in the IMS infield, access not available during any other race weekend. Powered and primitive spaces will be available to purchase throughout the infield for public camping.

Add in IMSA’s signature pre-race Fan Walk – allowing all fans in attendance the opportunity to roam the starting grid moments before the command is given to start engines – prior to the WeatherTech Championship and Michelin Pilot Challenge races, and it will be a can’t-miss weekend for race fans.

The WeatherTech Championship race marks the return of top-level IMSA competition to the Speedway for the first time since 2014, when co-drivers Christian Fittipaldi and Joao Barbosa claimed the Brickyard Grand Prix victory for Action Express Racing in their No. 5 Corvette Daytona Prototype. The first IMSA race at the Speedway was a three-hour GRAND-AM Rolex Sports Car Series event in 2012 won by Starworks Motorsport co-drivers Alex Popow and Sebastien Bourdais.

Looking forward, IMSA will return to IMS in 2024 and 2025 as well for longer endurances races. Fans who purchase race tickets or infield camping in 2023 will have first access to secure those spots for the 2024 IMSA endurance race.

Please visit IMSA.com and IMS.com for more information about the IMSA Battle on the Bricks.