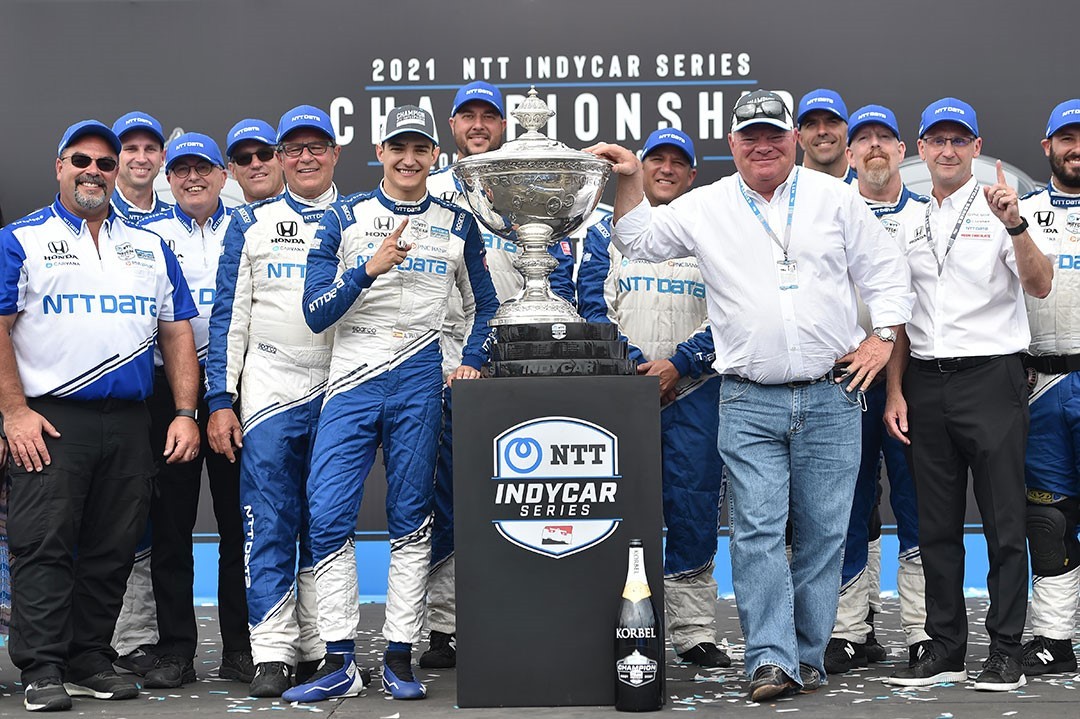 Alex Palou raised the Spanish flag over his head and hugged every teammate he could find. The first championship trophy of his professional career at last in his hands, he planted his lips on the Astor Cup and savored a dream come true.

He spent two years racing in Japan, but it was INDYCAR where he wanted to be and Palou simulated life as if he drove in America’s top open-wheel racing series. He’s now an INDYCAR champion - his first title since karting as a teen - and the first Spaniard to claim the crown in series history.

Palou finished fourth in an easy Sunday drive at the Grand Prix of Long Beach to cap a smooth and steady second season in INDYCAR.

“There were moments where I was just feeling like I was living my dream, and now I’m doing it,” Palou said after the race. “Oh yeah, 100% dream completed. Let’s get another one now.”

Colton Herta won the race - Long Beach is considered his home track - for his second consecutive win and third of the season. Josef Newgarden finished second and Scott Dixon, the six-time and reigning champion, finished third before turning the INDYCAR crown over to Chip Ganassi Racing teammate Palou.

The 24-year-old had never before seen Long Beach before he arrived this weekend - the historic course was canceled last year in the pandemic - but his consistency since winning the season-opener in his first race driving for Ganassi had him in solid position. His 35-point lead meant a finish of 11th or better would win him the title, and once challenger Pato O’Ward was knocked out with a mechanical problem, Palou just needed to make it to the finish.

It capped a remarkable run in which Palou earned his break a year ago with Dale Coyne Racing then manifested his childhood dream to race for a championship by introducing himself to Ganassi at the Indianapolis 500. He moved into Ganassi’s No. 10 this year, won three races, finished second in the Indy 500 and led the standings 12 of 16 weeks.

“Chip told me when I joined that I had to win a championship, so that’s not too much pressure,” Palou joked. “He likes winners. If you are not one, you are in trouble.”

After climbing his way through the European ranks, Palou raced two years in Japan but had not won a title since competing in go-karts as a teenager in Spain. “His apprentice program into racing most recently was in Japan, so I think he brings a lot of that Japanese mentality to the team, which a lot of us find refreshing,” Ganassi said. “He brought a certain fortitude that you see in that part of the world. And you know, he didn’t turn a wheel wrong all year.” Palou has now joined an exclusive club of all-stars in Ganassi’s elite “I like winners” club. The title was the 14th in American open-wheel racing for Ganassi among six drivers and came 25 years after Jimmy Vasser gave the organization its first championship.

Palou joins Vasser, Alex Zanardi, Juan Pablo Montoya, Dario Franchitti and Scott Dixon as Ganassi open-wheel champions; he’s the first Ganassi champion since Montoya in 1999 not named Franchitti or Dixon, who combined for nine titles from 2008 through last year. Franchitti is now the Ganassi driver coach and Palou is considered the best driver in the No. 10 since a head injury forced Franchitti into an early 2013 retirement. Palou is the first Ganassi driver since Franchitti to beat Dixon in the season standings. “I think he’s raised the bar for all of us this year to keep pushing,” Dixon said. “It definitely feels like kind of the 2009 through sort of ’12, ’13 period with Dario. Super proud of what the 10 car has done. Super proud of Alex. Man, he’s done a tremendous job this year.”

Palou won the championship by 38 points over Newgarden, who bumped one spot ahead of O’Ward once O’Ward was eliminated.

O’Ward was eliminated from title contention when his drive shaft broke because of contact on the very first lap of the race. O’Ward needed Palou to have a disastrous day to become INDYCAR’s first Mexican champion. But the 22-year-old was frustrated all weekend, even though he had vowed to pull all the stops to disrupt the championship race.

He was unhappy with his car in practice Friday, then furious Saturday when an INDYCAR ruling prevented him from advancing to the final round of qualifying. That put O’Ward in eighth at the start of the race - in traffic that led to a first-lap disaster. He was spun from behind by Ed Jones just minutes into the race while running eighth. “It’s not the first time he’s hit us,” O’Ward said. “I just wish he could use his head a little bit more, at least respect the guys that are fighting the championship.” As O’Ward slowed his car on the track, Arrow McLaren SP chief Zak Brown threw his arms up in disgust on the team timing stand. Some six hours earlier, Lando Norris lost a chance at his first Formula One victory when the McLaren driver slid off a wet course in Russia as the late leader.

“Definitely not a great day, both over here and in Russia, with such high hopes,” Brown said. “Pretty disappointing that Pato got taken out by a bit of an amateur move before the race even got started.” O’Ward won two races this year, his second full season in INDYCAR, and earned an F1 test with McLaren scheduled for November. “I’m proud of the team. I’m proud of myself,” O’Ward said. “I’m looking forward to next year. I think we have a great baseline to start off from and see if we can get some more wins and challenge for a chance for another title.”

Ed Carpenter Racing announced before the race that 21-year-old Rinus VeeKay will return for a third season. VeeKay scored his first career victory earlier this year on the road course at Indianapolis and followed it with a front-row starting spot a week later for the Indianapolis 500.

The Dutch driver peaked at fourth in the standings this year but missed a race because he broke his collarbone in a bicycle crash. VeeKay did not finish higher than 16th in the seven races since his injury.

The third season makes VeeKay the longest-tenured full-time driver in ECR’s 10-year history. Carpenter, the team owner, only runs ovals and shares the car with another driver for road and street courses.

Carpenter has not said if Conor Daly will return in that role next season, but Daly still has ECR on his list and does not expect to put a full-season schedule together with one single team. Ryan Hunter-Reay has been mentioned as a candidate at ECR.